Writing a guest blog for a woman who I consider to be nailing it when it comes to being a woman who can do it all (which she herself admits, she does not and we do not have to do it all- be it all, she just wants to encourage us to do what we do overflowing with passion and love) surprisingly brought up some shoved away insecurities.  I guest blog from time to time for random internet blog buddies and write occasionally over at adoption.com but a post for Life-As-She-Does-It felt daunting. And then she had to go and get the witty Katy Livingston to go first, leaving me the follow up post. I stand little chance. It’s like signing up for a meal train to bring my store-bought chicken or grilled cheese sandwiches the night after your foodie friend has listed she is making lambs with chimi-churi sauce and homemade buttered-pecan ice-cream. The "look-ahead" is a real technique to make sure you are not setting up your people for disappointment. Now here I offer you my boxed mac n’cheese with added hotdogs weenies, after you just ate homemade beef bourguignon.  Go ahead a lower your expectations my people.

Continue reading my guest post over at LifeAsSheDoesIt and then stick around that site and discover all the great things it has happening!
Posted by Carly at 9:34 AM 1 comment: 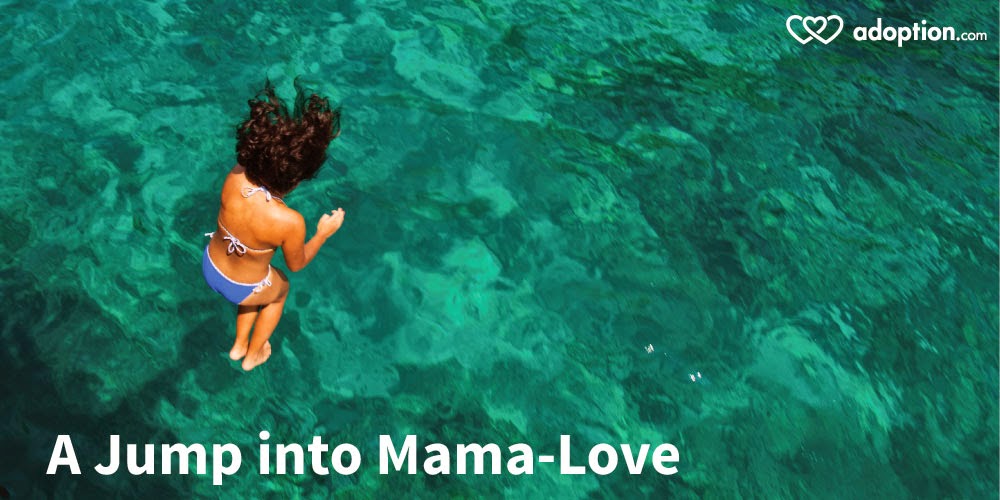 I really have nothing to compare it to, I imagine though, this is the story of mama’s around the world. Whether our babies grew in our hearts or our wombs. Whether we share blood or share souls.  I am learning we are all immersed in the beautiful mystery of Mama-love.
We actually were not supposed to have our meet cute that day. The courts, paperwork, notaries; it all was backed up. Not to mention we were learning that times and appointment here were really mere suggestions. There was always time to stop for coffee or breakfast. Even if it was 8:00 am and you appointment was at 7:30 a.m. your driver wants to stop for an espresso and we had decided to embrace these caffeine emergency delays because more than likely your judge, translator and social worker might actually be at the same coffee car outside the building doing the same thing….

Continue reading the rest of this story at Adoption.com
Posted by Carly at 8:19 PM No comments:

2014 flew right on by and we are now entering "the year of the hover-board".
I like to spend a little bit of time at the end of the year in reflection. The first time I did this was here, for 2012, helping me create and seal some precious moments in that I would otherwise be unable to recover years from now. So let's look back at some of the biggest moments of 2014.

January was our first full month home with Little Man. Quite a chunk of that time was spent battling RSV at Texas Children's. We were thrown head first into parenting. It challenged me to let go of expectations and control. I made the decision right there to not take for granted one second of the new gig I have been given. No matter what.

In February, we started at The Rise School of Houston.
Game Changer.
The teachers and therapists at this school are one of a kind, helping Little Man reach his potential. He loves it, I love it and they, of course, love him. 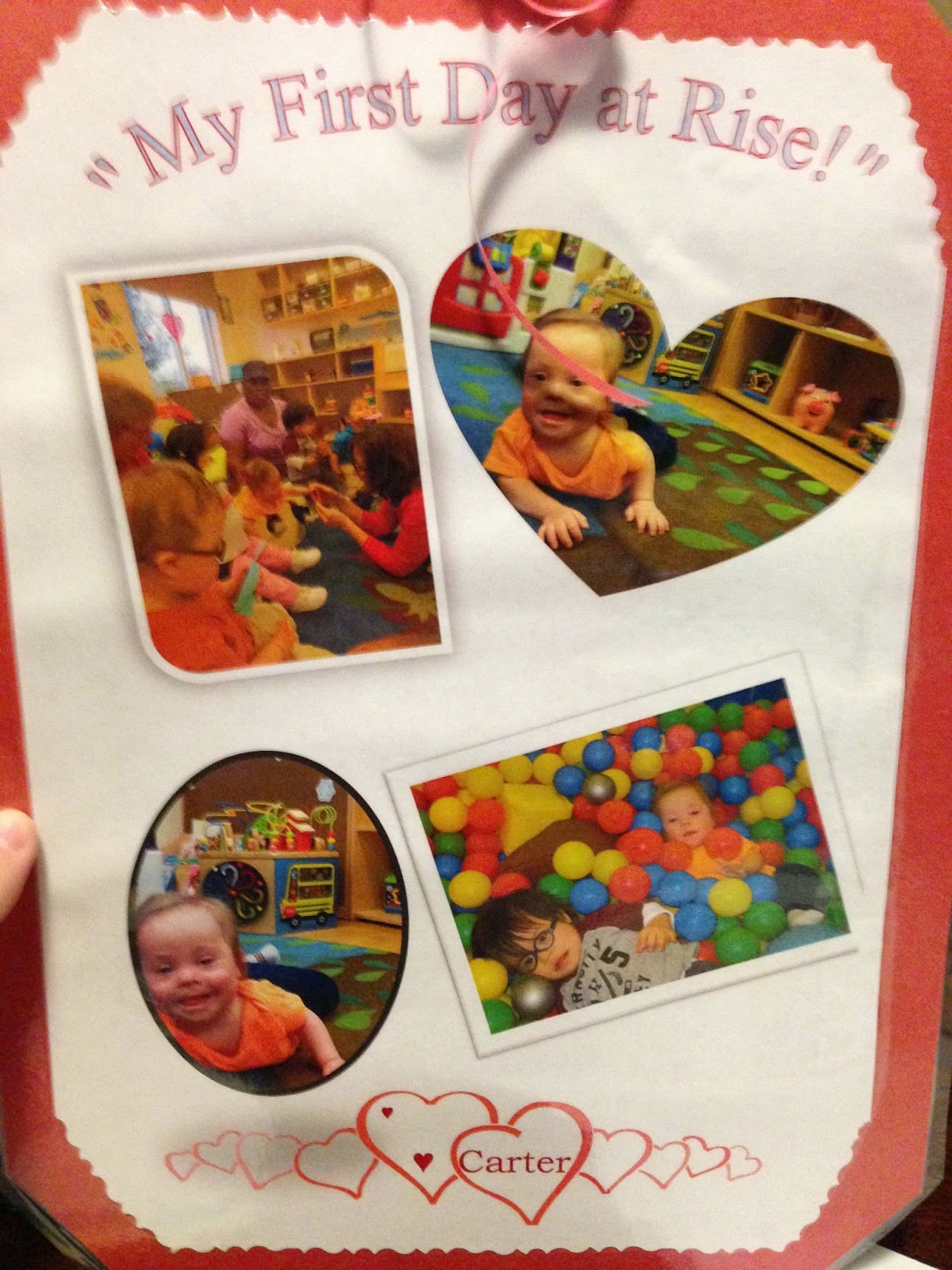 Spring came and brought with us Little Man's first birthday. 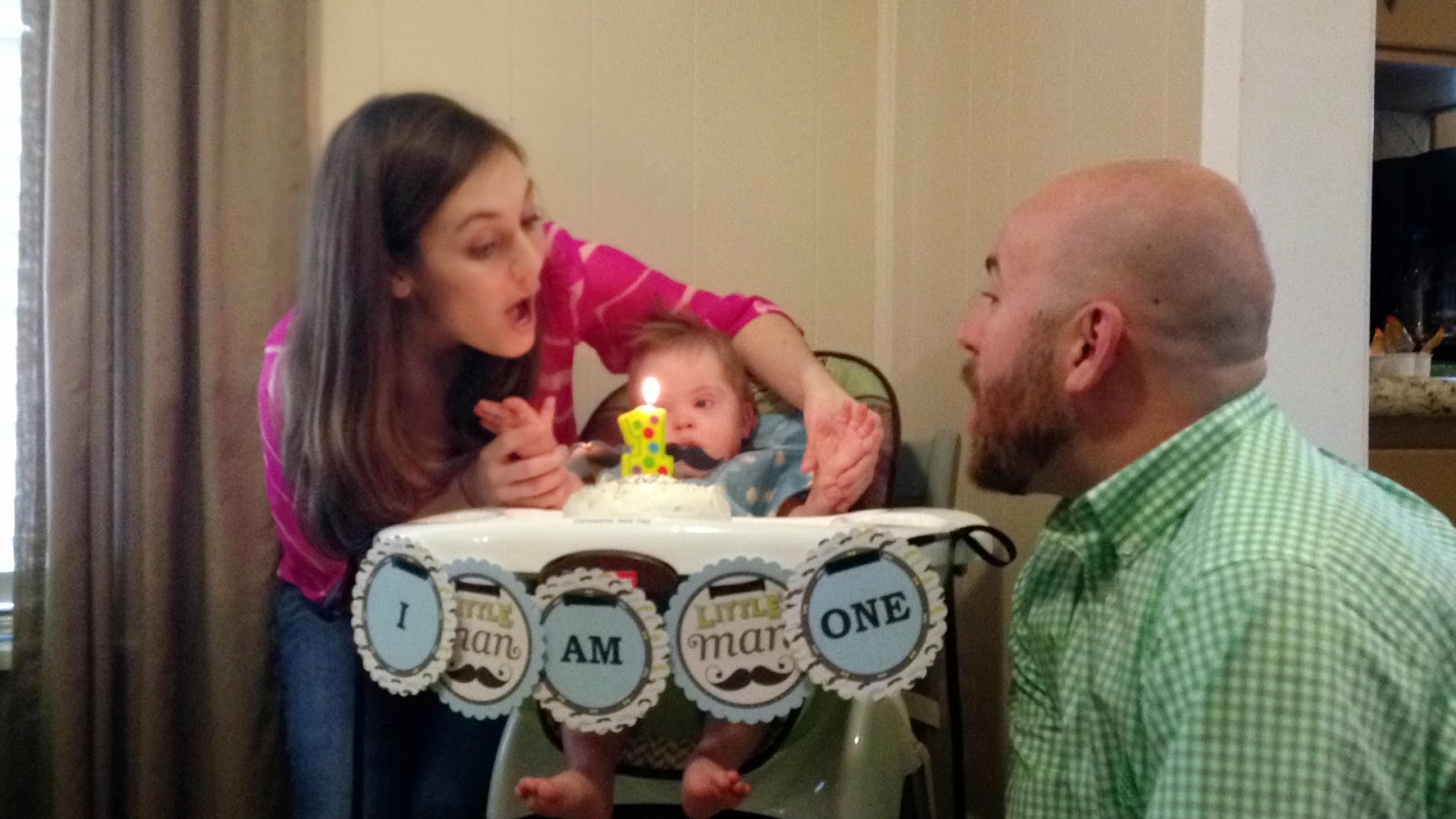 What many did not know, is it also brought us another pregnancy. As Little Man blew out his candles (Ok, you caught me, really we blew them out), I had sweat beads of morning sickness nausea dripping down my neck. The flame flickered out and I pictured us doing this again at his birthday next year, with a baby in our arms. We were the cliche - we were that story that always gets told to adopting couples - we got pregnant right after an adoption!

In the summer, I graduated as a Family Nurse Practitioner and some how passed boards. Grace! An adoption and grad school might be tricky for some, but not if you are surrounded by the incredible family and friends that I have. As family gathered to celebrate, I started to have signs and symptoms of a miscarriage and we ended up at the hospital instead of the ceremony. Instead of walking the stage, I was given a different gift:
I watched a baby's heart beat within me for the first time.
Hope had been conceived.
The next couple weeks we hung onto hope. Each appointment with a flickering heart made my hope grow stronger.

We lost Hope the end of May.

May, June and July were hum-dinger months for Little Man. We got our senses up and going! Tubes were put in the ears, glasses were prescribed and he got his undescended testes brought down! Then to really end the summer with a bang, we had a couple of health scares. Including a rushed ER trip with the car flashers on and me, embarrassingly, hanging my head out the window, flailing my arms screaming for people to get out of our way. Because acting like a maniac in tense situations helps.
Kidney function concerns, frustrating MRI's, and a couple blood tests later we confirmed Little Man is healthy, happy and thriving. He just had a terrible kidney infection. Once we found the right antibiotic, he healed right up.
He is tenacious and brave. 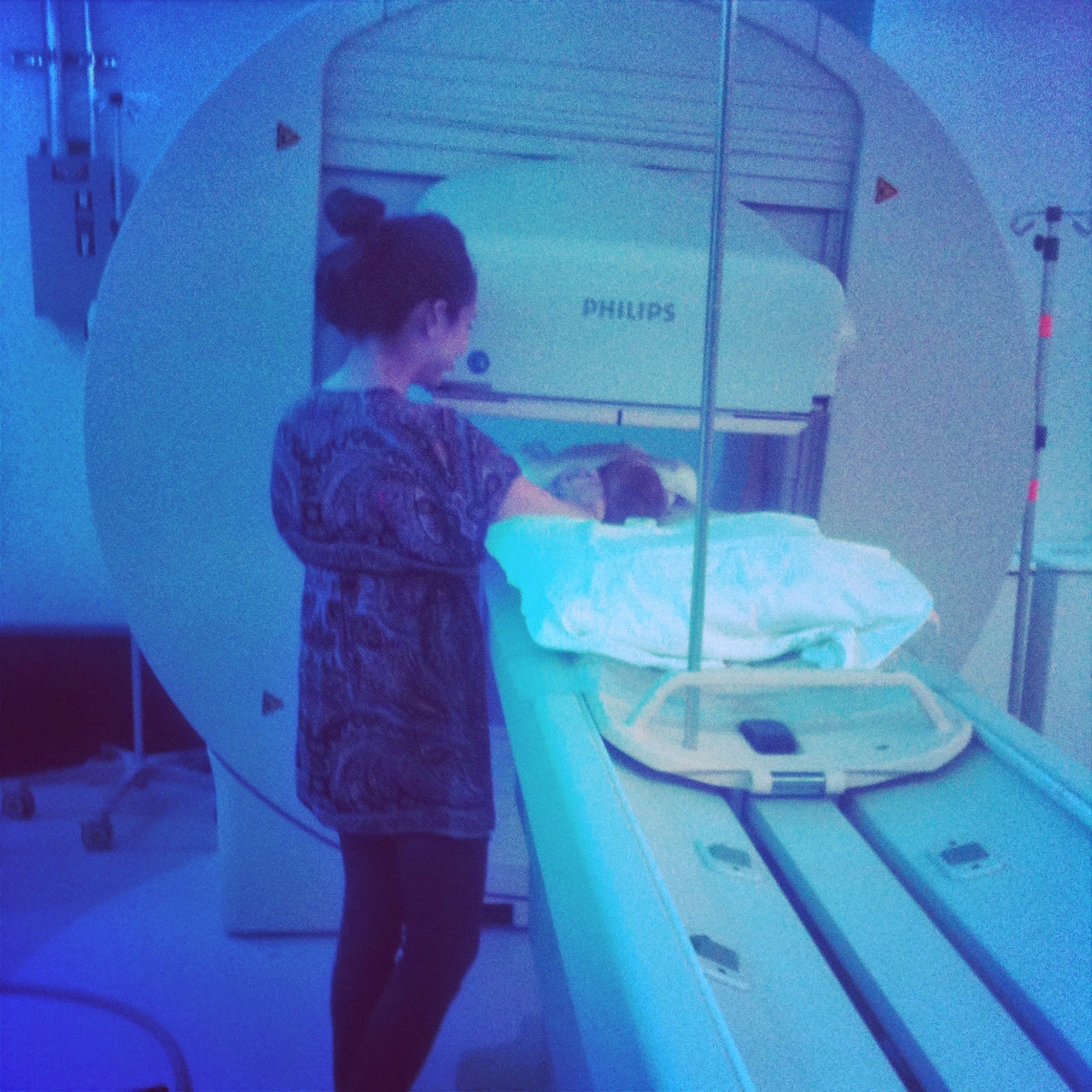 We finally made it to Midland in August. A trip to Mimi and Papa Jack's house after a hectic summer was just what the doctor ordered. 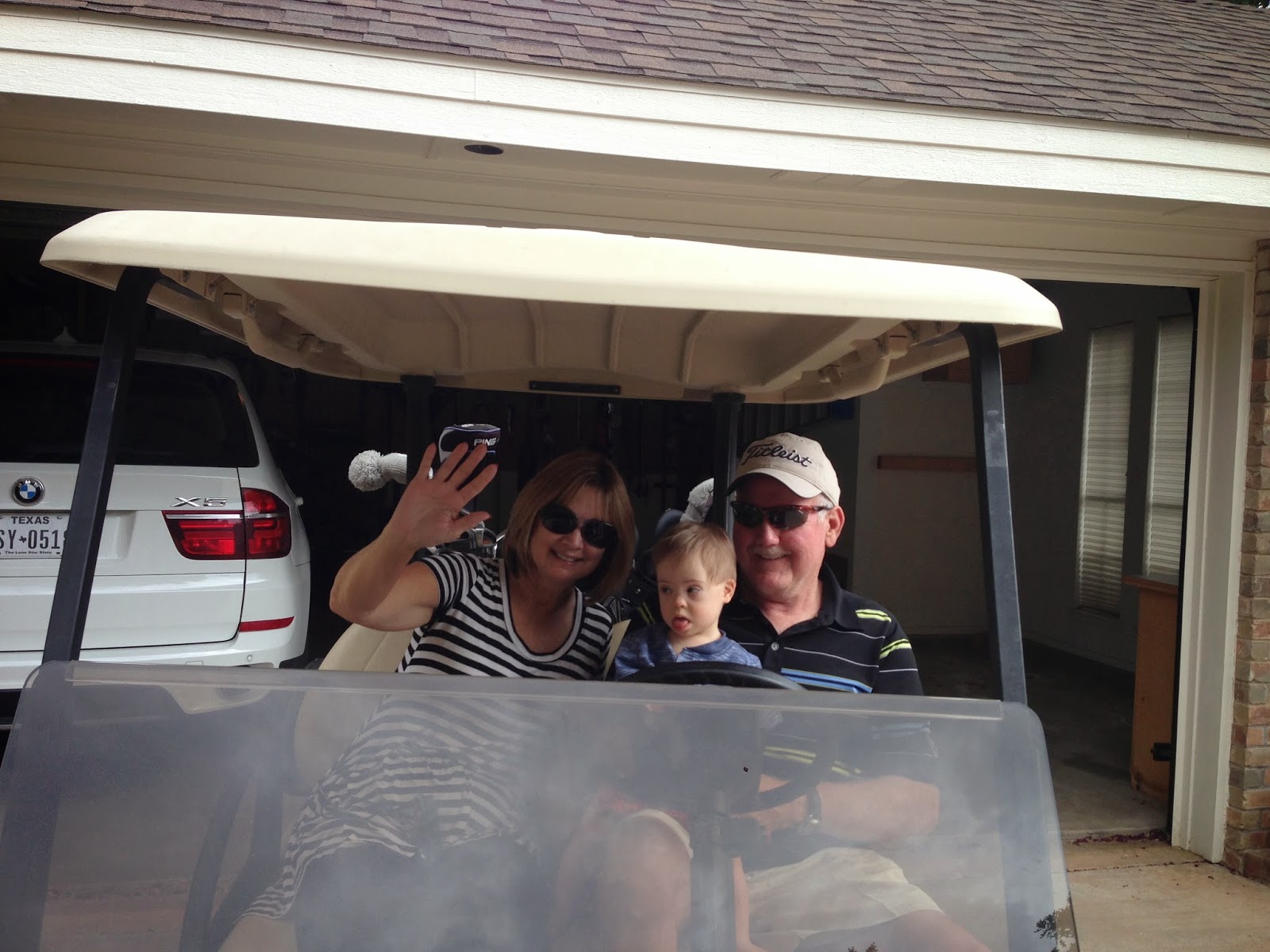 Fall brought pumpkins and teeth.  Little Man loves words that start with d and p and laughs hysterically at them. He brings such joy. He is a gift in so many ways and our lives are way better indeed. He also got a mouthful of teeth; it seems like overnight. We woke up one morning to a cute-giant-toothy grin! 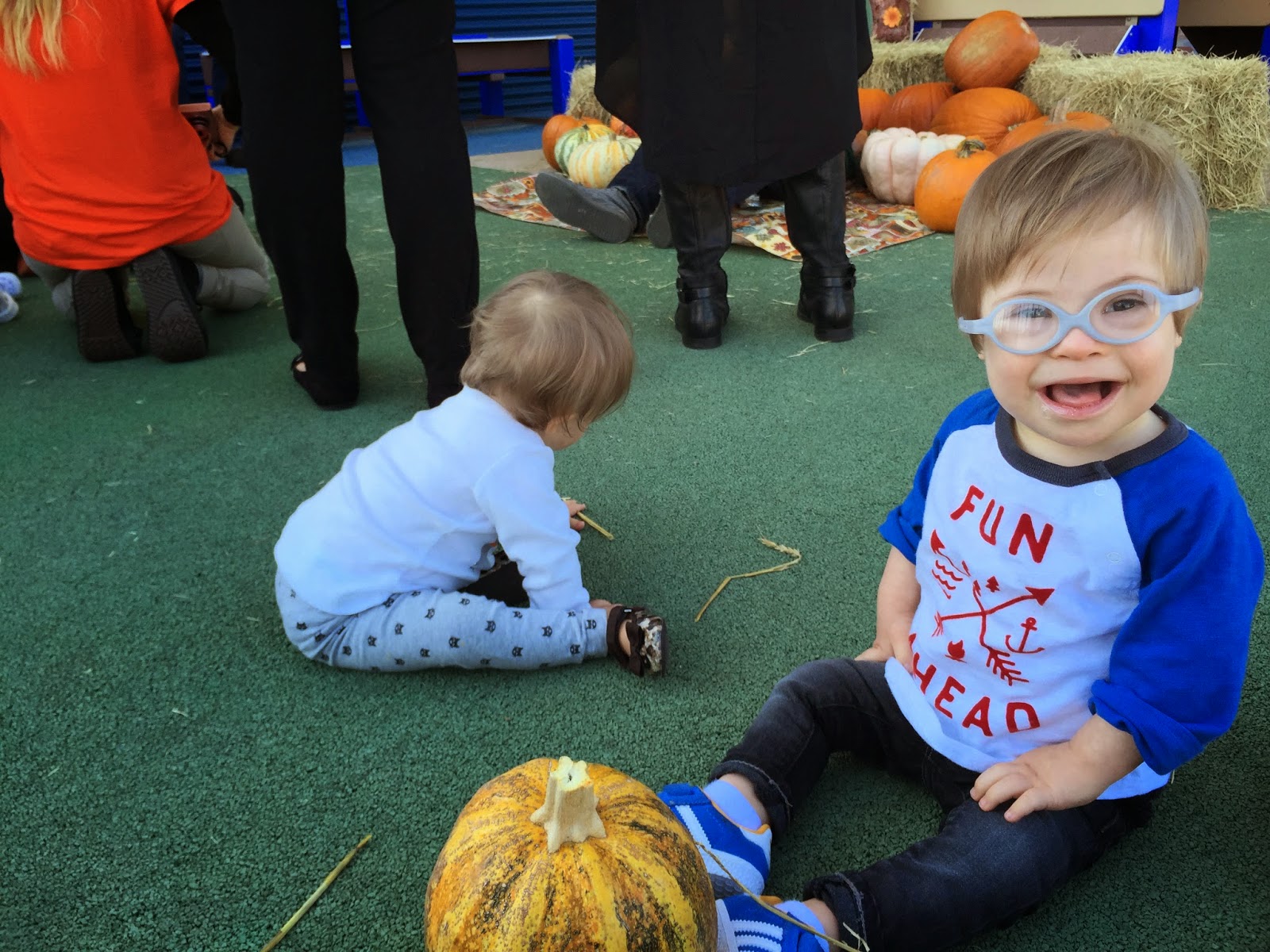 Fall also brought us an attempt at IUI.  The D's made it a family affair. We even awkwardly met up with Crazy Uncle C in the hospital lobby.

How funny would it have been to say Little Man was there for his brother/sister's conception?
To be honest, I never really thought it was going to work, I just felt like I needed to try it so I wouldn't regret not having tried it later. Surprisingly, this failed attempt did not rock me the way I feared it might. It might also be because right after the Big-Fat-Negative-news we entered Winter.

Winter brought such a season of gratefulness. Thanksgiving 2013 was spent eating crackers on an orphanage couch with Little Man. To have him in our home, in our arms, crawling around, babbling up a storm this year was overwhelming.


Basically, everyday I had a "this time last year" moment that would almost move me to tears. Instagram followers were probably annoyed with all my #tbt cheesy posts. I couldn't stop myself. I was stuck in a sentimental cloud for most of November.
We are a family. And on Dec 13, we celebrated with our friends and family that we are indeed "Forever a Family."

Once again, we move into another year without the "gift" of pregnancy. There were a couple days of lost hope in 2014.  Literally and metaphorically. Our hope was due in December and due dates can be daunting with miscarriages. But Christmas came and reminded me Hope did come to the world. Our long awaited HOPE is already here.

Thankful for Grace. During the last couple of years, there have been people in my life who have stepped up to the call. They provided resource, encouragement and friendship in astounding ways.  I move into the new year asking God to stir my soul, to make every bitter thing sweet as I hunger for him, and to open my eyes to how I can now be an encouragement those around me.

We enter another year asking God to redeem our loss. And if you have read much on my blog, you know he does time and time again.
2015 and Martin McFly, Here we come!

A couple weeks ago Little Man and I were cruising into town to go to RISE and jamming to our usual PAGE CXVI, in hopes that it would lull him into a deep travel slumber. Instead it was me that got lulled into a deep travel sob. One of the lullabies was Do, Lord an old hymn. Tears leaked from my eyes and stuck to my cheeks as the song words swirled throughout the car begging to be remembered.

Do you remember me?

Have I been forgotten?

Infertility has the trick of making you feel broken. Lying to you that the reason you can't get/stay pregnant is that you are broken and God does not want to fix you. You have been forgotten. I laid on the couch at nearing the end of my first trimester and already on bed rest with a subchorionic hemorrhage. We were not of to a good start. A group of friends gathered around and "laid hands" on me to pray for me and baby. This is awkward for me. The denomination I grew up in did not do this much. I feel silly. I doubt. I am cynical. I wonder. And in that moment I desperately searched my heart and genuinely asked God to help me overcome my disbelief, begging him to remember me.

That night I miscarried.


Do you remember me?

"O God my rock," I cry, "Why have you forgotten me? Why must I wander around in grief, oppressed by my enemies?"

Thanks David for finding the right words. Here I am, wandering around in grief and oppressed by my damn old ovaries! Betrayed by my own body and mind, acting as my oppressors.

If there was one thing I would say to someone wandering around in similar grief:

YOU ARE NOT FORGOTTEN

God loves you. AS IS. Do no let infertility whisper this lie to you anymore. The answer is 100% yes.

He remembers you.
He is the rock you can stand on during this whole journey. He is the one that will remind you of your great purpose and worth with or without pregnancy. He is the one that will redeem your infertility and make it into a story about him pursuing YOU to be a part of his kingdom.
I have been there sister, loved by God. I know the darkness and distrust that can take root. I began to not trust God. Not trust him with my prayers. I began to fear the worse. I needed to be reminded and then I stumbled across this video:

Carly
Sharing the "simple" things, moments, people, music, thoughts, and choices that are keeping me in a jovial state of mind as we navigate the waters of infertility, miscarriage and adoption. Who knew one simple prayer would turn our life UPside DOWN? 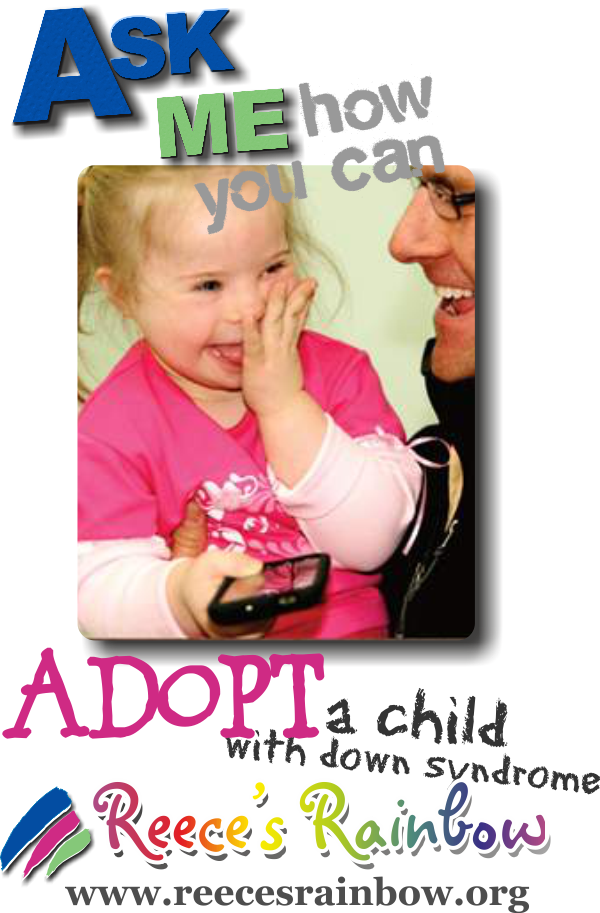 Other people who say it better: